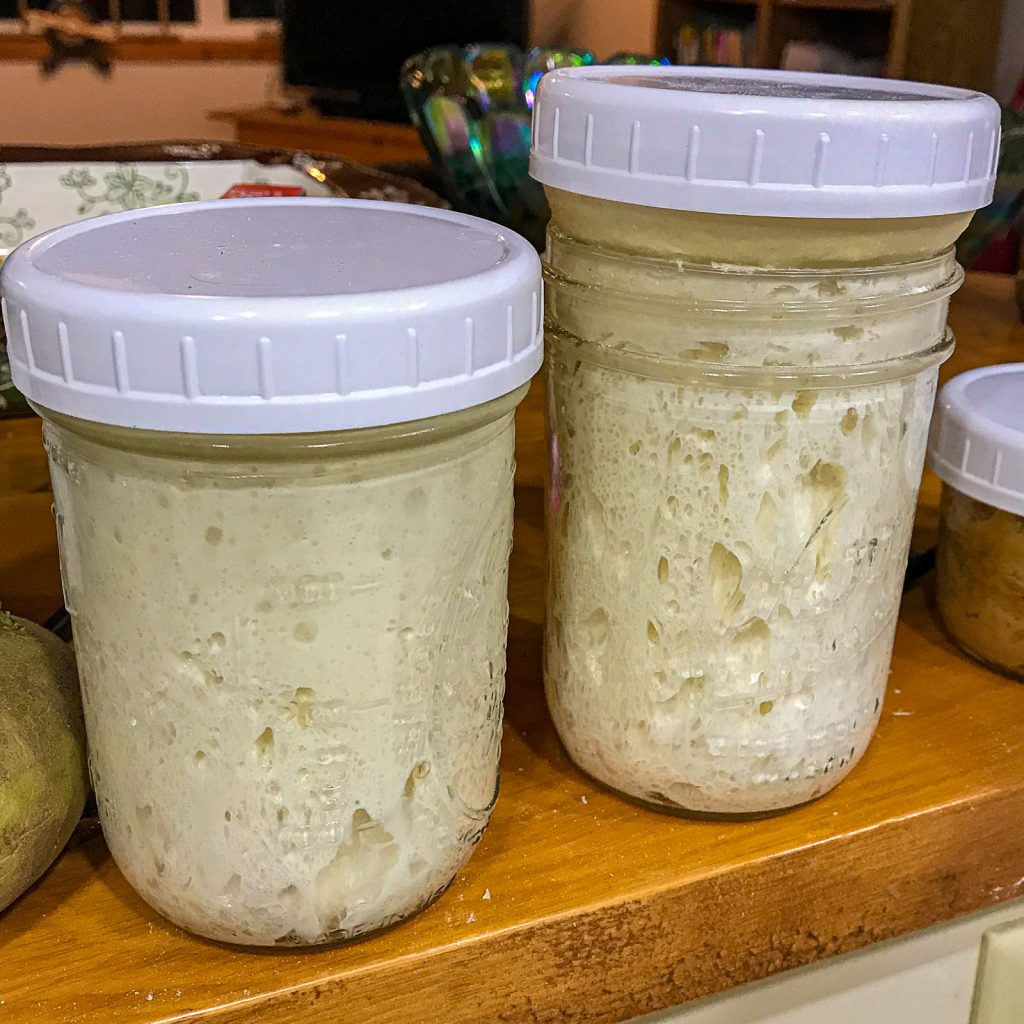 Ideally, feeding the sourdough starter is in grams. With gram scale you add 50 grams of flour and 45 grams of flour and mix with about a teaspoon of starter. I’ve measured what that equates to in cups and found that ¼ cup of flour and just over an ⅛ cup of water is the amount. (I use the same ¼ cup measuring cup and with the water I add just over half) 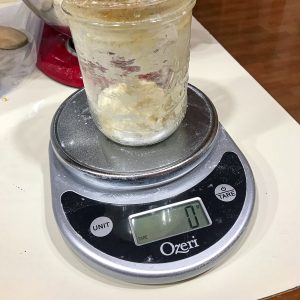 Gram Scale if you have one 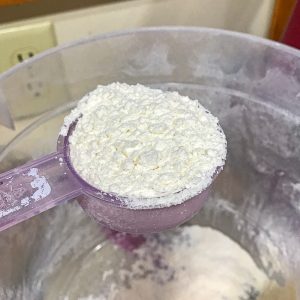 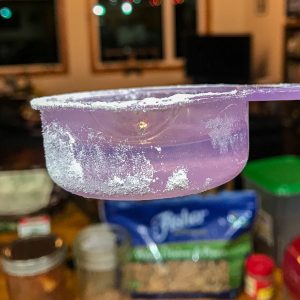 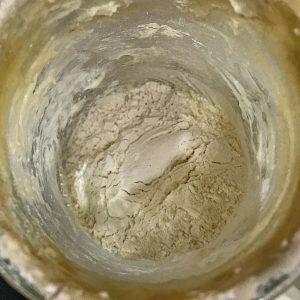 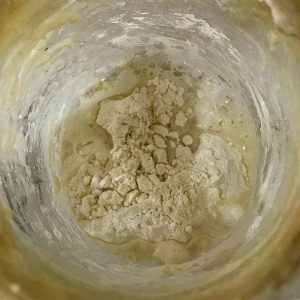 I’ve found that a flat edged butter knife works awesome to mix it up. After mixing, then just leave on the counter. I “knead” the starter with the knife whenever I’m in the kitchen until it starts to grow. In about 12 hours it should more than doubled. Then it’s ready to use. 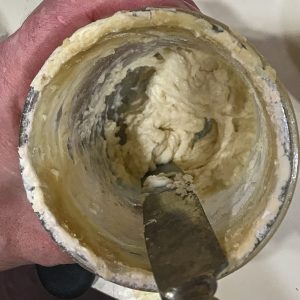 This is kind of like Kneading. Stir until well combined, scraping sides clean. 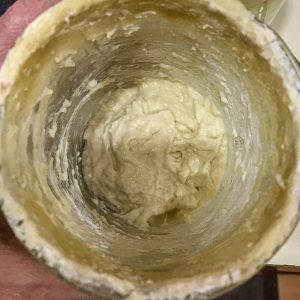 I use the starter in my “hybread” recipe that uses both sourdough AND yeast. This causes and active rise and also allows cutting into the bread when it’s almost cooled. A true sourdough bread really isn’t ready until the next day. Basically I’m using the sourdough for flavoring, but it also does alot of the heavy lifting for the rise. When using, just scoop out everything. It takes just the littlest bit, a smidgen as my grandma used to say, to start another batch. It shouldn’t be too runny. It will resemble a very soft bread dough with lots of bubbles. 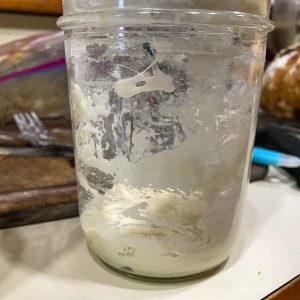 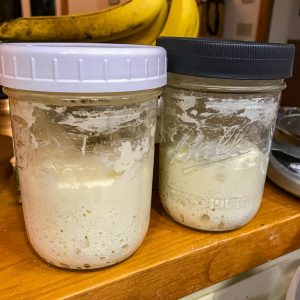 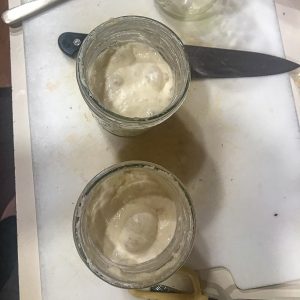 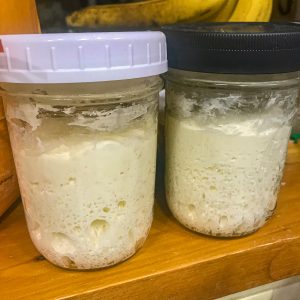 Over time you’ll want to feed it at least once every couple of days. If it gets a little light orange skin and smells really boozy, then it really needs feeding. Just scoop out almost everything and trash it and feed it and it will get happy again. This batch really likes the artisan flour. If I notice it’s getting weak, I’ll add a little whole grain to it to help it along.

This will grow to about ¾ of the pint jar, but when it’s happy it may even grow all the way to the top.

You know it’s ready as it just crowns up before starting to retreat. If you want to use it exclusively without yeast, take a teaspoon of the starter and see if it will float in water. If it does, it is ready.

Backup- As a tech guy, a backup of documents is a must. Well, you can make a backup of sourdough starter as well. If it gets really happy and bubbly and awesome, but you don’t have any baking lined up, take the amount of starter out, just like you were making bread, and spread it thinly parchment paper and let dry. Not only will you have a backup, but it seems to super charged by gathering more yeast from the air. When it is completely dried out, break it out and blend the flakes in a blender. It will turn into a fine powder. I then put this away in a dry place for use later. To reconstitute, take about a tablespoon of dried starter, a tablespoon of flour, and about tablespoon of water and put in a pint mason jar. Stir well let sit, stirring every so often. You’ll see some tell tale bubbles appear and it’s time to feed it as above. Generally the first rise isn’t powerful enough to use for baking, but the next will be. 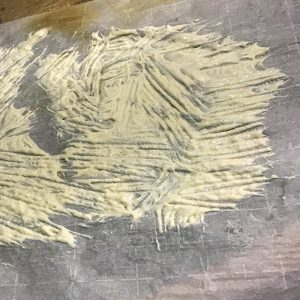 Sourdough starter applied to Parchment paper. Used a fork to make it thin and add areas to dry. 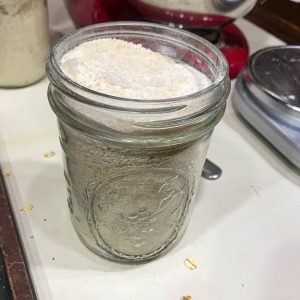 History- The starter was borne April 4, 2020 during the pandemic. It was started using an apple and flour and cultivated for a year. I crushed an apple and let it set out for 5 days. When it started to smell a little boozy, I added flour and a little water and let it sit uncovered for another week. I stirred it several times per day and eventually it started to grow. Initially it was a little week. It really only could rise about 50% or maybe 1 to 1. My has the little creature grown!!
It has some strains as well from a batch from the Nyac Gold Mine and a package of starter that claimed it was from the Chilkoot Trail of 1898. I had a “competition” to see which was the best and the apple was always the best. I tested mixing them all together and liked the smell and taste the best. It should be a sweet sour. 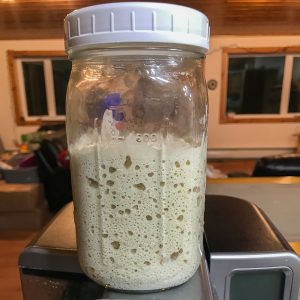 In the early days, maybe a month old. A lot of bubbles, but not much growth or strength. 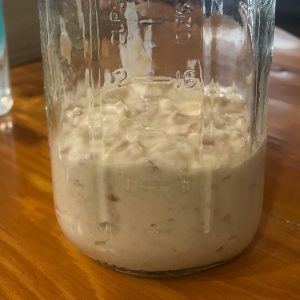